The first of three full team scrimmages- roughly 50 or so plays involving various situations- is in the books from Hillside Stadium. And if one had any doubt as to just how hungry these men are to play for real, that definitely should have been erased Saturday morning. Simply put, it felt like a game situation based on the yelling back and smack talk back and forth. There was even some pushing and shoving at various points.

“We’ve been jawing back and forth all throughout camp so it was fun to do it in this situation.”

Casher and the defence definitely had the upper hand for most of this one. Yet no one can jump to conclusions with roughly ten more practice days left in Kamloops. More on this in just a moment…

Head coach Rick Campbell gave his overall assessment of the eventful morning in the heat.

“There are some guys that did some really good things. A little sloppier than I had hope. Our d-line has done such a good job in camp as far as staying onside and stuff. When we kind of ramped up the intensity a bit, we forgot a few things like lining up onside. That’s very typical of week one in training camp. It’s a big thing for us to do this for the players and watch and learn from it. We’ll be doing that over the next couple of days and then move on to week two.”

“I really liked people’s enthusiasm, I liked their effort. I liked how engaged people were. People were really paying attention. We had quite a bit of stuff in, playbook-wise.”

Big Plays In Scrimmage One

The play of the day, by far, was courtesy defensive back Marcus Sayles who snagged an end zone interception right from the paws of Bryan Burnham.

“We’re just working on not giving up any deep plays,” said Sayles in a Facebook Live interview.

“We try to stress taking the ball away from the offence when we get into those red zone situations. Our coaches call it deep defence. We’ve just gotta execute.”

Other interceptions on the day came from Jordan X. Williams, Jeff Hector and a nice one from Nydair Rouse that could have gone for a touchdown in a real game-like scenario.

Anthony Cioffi looked to have a quarterback sack in a blitzing situation early on and Victor Gamboa made a couple of nice plays in the secondary.

The production also continues to come from a few of the interior defensive linemen. Tim Bonner and Obum Gwacham are among the standouts in scrimmage one.

It was another maintenance day for Michael Reilly who was in uniform but taking it all in from the sidelines. Will Arndt and Nathan Rourke each took command of the first-team offence and helped them battle through despite some early struggles. Lemar Durant made the first long reception for that group on the day. Dominique Rhymes made a big catch and run from Arndt to help get the offence going after their slow start.

Rookie Jamal Custis has improved each day and made a nice leaping grab from fellow newcomer D’Angelo Fulford early in the session.

Speaking of Fulford, the former Mount Union star and Division III national champion continues to impress with his ability to scramble and run to prevent negative plays. The lone touchdown of the day came on a Shea Patterson pass to rookie receiver Johnathon Johnson during red zone segments.

Here’s a scary prospect from some CFL defence and special team units: Chris Rainey looks as fast as he ever has. 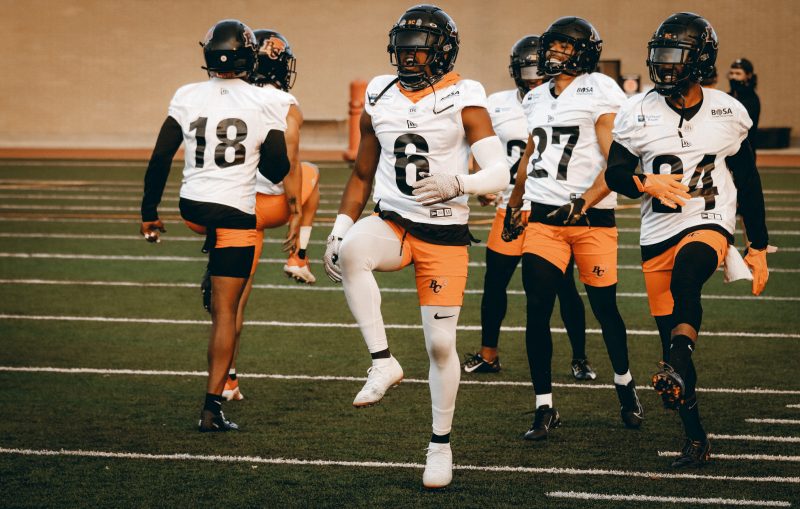 Campbell has been fairly committed to having players and staff members express themselves as much as possible. Example today was when he had all first-year Lions gather around and sing O Canada to the fans at Hillside Stadium. Take a look! Speaking of fans, it was a great turnout. Awesome to see a bunch of you back.

Perhaps a little homework & practice before the next serenade. 🤣#CFLTC #ThisIsOurPride pic.twitter.com/BGSjceoxkl

The squad will have a slower day Sunday with only meetings and a short walkthrough scheduled. Full practice resumes Monday with a back-to-back session (8:30am-NOON) at Hillside.